The first generation of Jellyfish is equipped with a newly invented power-take-off (PTO) mechanism, which replaces the liquid dampers with a pair of variable ratio gears, providing a higher damping effect in the face of strong ocean waves. This also aids in capturing small waves’ energy with a relatively simple design. The experiments conducted on the “nodding pod” prototype (1/20th scale) demonstrated about 55% efficiency in capturing waves’ energy for waves with 5.5″ height. The procedure of design, manufacturing and experimental analysis of the prototype were all performed in our shop. 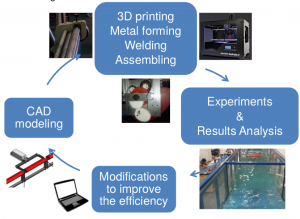 Here is a video of an initial testing