Ocean waves represent a tremendous source of untapped renewable energy. Wave energy is considered to be one of the most concentrated forms of renewable energy and its high energy density suggests that it has the capacity to become one of the cheapest and cleanest renewable energy sources. The World Energy Council has estimated that approximately 2 TW, about double the current world’s electricity production, could be produced from the oceans via wave power.

The market for wave and tidal energy is expected to reach USD 3.9 billion by 2025 based on some reports. This partially stems from the policies adopted to decrease the dependency on fossil fuels as well as supportive governments regulations. In 2015 alone, investment in novel renewable sources to produce electricity was twice of that of fossil fuels.

“Commercial viability is just around the corner, and the global market, forecast to be worth £50 billion by 2050” ~RenewableUK

Compared to other ocean energy technologies, the Jellyfish can be built to 20MW per unit. 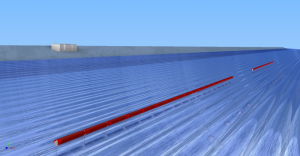